The behaviour of living systems follows a consistent pattern, from instinctive to thoughtful to enlightened. Our holonic framework characterises the principal profiles observed:

Astraea's focus is on enlightening behaviour in individuals and organisations. Our holonic model helps characterise underlying motivators and so informs whole systems design and development for people and organisations.

The holonic spectrum is a values based framework that describes the natural spectrum of behaviour from modest to sophisticated. Our use is focussed on people and human organisations: what motivates people and organisations. However, it is a universal framework and so offers insight in to the behaviours or all systems. It applies to both physical and metaphysical realms, respecting a coherence of body and spirit.

We use colours to clarify the principal behaviour profiles. They are simply the colours from the visible part of nature's electro-magnetic spectrum. They reflect the idea that the spectrum continues to extend from both ends. Notionally, a similar pattern of eight zones of progressively sophisticated behaviour would continue to repeat beyond the ends of the spectrum we are focussed on.

Our holonic framework emerged from seeing similarities in the interpretation of consciousness which came from different roots (yoga to psychology). The main ideas that helped develop the holonic perspective are: C. G. Jung, Mazlow's hierarchy of needs, Spiral Dyamics, Business Consciousness Model, yoga and chakras. Beyond behaviour of people and human organisations, we also noticed coincident similarities in the behaviour of natural phenomena, from the individual human to the species and from subatomic particles to universal bodies.

Furthermore, professional analysis of the organisation of life is described with standard dualities:

Combining these comparative perspectives in to a graphic (shown here) helps to recognise the integral connectedness of seemingly different phenomena. This chart is adapted from Ken Wilbur's Theory of Everything.

Summary of Behaviour Profiles or Memes

Behaviour is driven by what motivates, which can be external stimulii (like a kick in the arse) or internal instinct ("I'm hungry") or thought ("I want to change my life"). In people, values are the key to internal, thoughtful motivation. And thinking is the only tool with which to control animal instinct.

Humanity is distinguished by its intelligence, which allows more sophisticated decision making than in other life. Intelligence opens the range of motivations from instinct, from purely physiological needs of survival and bestial desires, to a range of higher levels of thinking which result in more thoughtful behaviour, more productive behaviour, and happier people.

It has been shown empirically that a limited number of motivation profiles are exhibited in people, to a greater or lesser degree. The prominence of each is partly dependent on circumstances and partly on the innate capacities of the individual. It is easy to imagine what the most basic motivators are: food and protection. The most basic motivation any living thing has is for self preservation. Survival is the primary objective. As this is satisfied relationships become valued more. As these needs are satisfied other values emerge like a demand for power and control, for purpose, for organisation, and even for sharing. This development can be seen clearly in children and we often use broad decriptions to describe types of people we might meet, such as "bureaucrat", "cop", "hippie", "consultant", "artist" and so on. They might not be scientific, but to us they perfectly describe the kind of characters we are living with everyday. This framework offers a model to understand behaviours which can be used with other personality profiling.

The holonic framework describes eight principal profiles using cultural descriptors such as generous, egotistic, selfish, dominant, leader, collaborative and so on. These behaviour profiles are consistent and can be described by only a few dominant cultural profiles or memes ("an idea, behavior, or style that spreads from person to person within a culture"). And natural systems tend to emerge along a spectrum of memes from less sophisticated (instinctive) to more sophisticated (consensus) influenced by their current physiological and emotional state and the environmental circumstances.

The mindsets described above are introspective - they focus on self. Enlightenment occurs when a being considers itself part of something bigger and sees itself and might then be able to self-manage its behavioural perspective or meme. It is a leap of thinking to be comfortable to recognise different approaches to life, and a real challenge to integrate these needs: needs for organisation, survival, purpose, power and sharing. Manifesting that behaviour is termed "Integral behaviour". Self-perspective is a characteristic of higher level consciousness. The key distinction of higher level thinking is inclusiveness.

And once that capacity is managed, the next level of sophistication is to compound the sophistication of personal and group value and action management in a seemingly chaotic complexity, which in fact is comfortably balanced - that is "Holonic being". Integrating many perspectives is holonic behaviour. The thought processes are quite zen: winning without winning, etc.

Once you begin to appreciate this reality 2 "rules" become apparent:

a) everyone is right;

b) there are no rules.

Not hierarchy, but holarchy. Not holistic, but holonic.

So, here's the whole table (rows represent the value zone or meme, columns represent different manifestations of that meme).

No person (or other entity, since this framework is universally applicable) exhibits just one value zone. One or two or three might dominate, but all are present or at least potentially present. 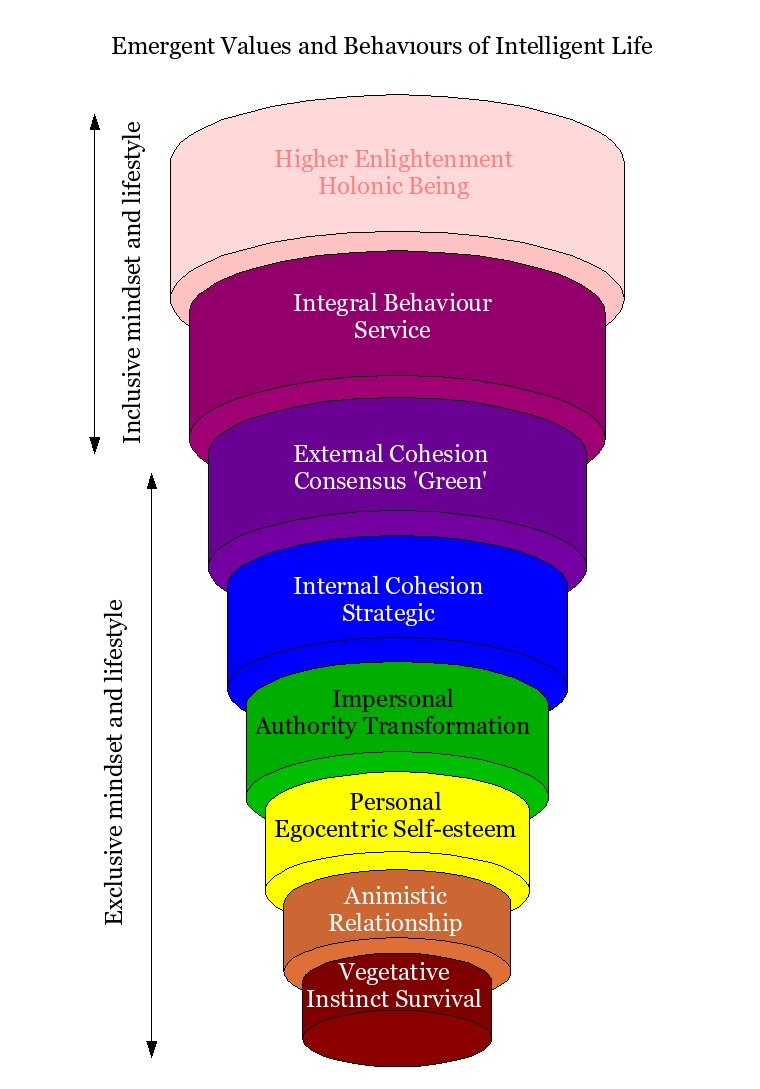 This cone is a graphic representation depicting increasingly sophisticated value zones. The first zone, at the bottom of the upside down cone, is the instinctive zone, whether it refers to structure, values or behaviour. Its character is the most basic, which even plants might exhibit, instinctively pointing to the sunlight for example. Though, for a thinking creature like a person or organisation, behaviour is a bit more sophisticated it is still about getting enough food or income etc.

While the simple graphics show uniformity of memes and distinction between them, that is simply for presentation. The reality is that each person or group acquires increasing sophistication at different rates. Also, the line between memes is blurred as is the emergence of new characteristics. It makes common sense that it takes time to realise that you have enough to eat and always will, and friends might be nice too, and then get them.

It helps to imagine the increasingly sophisticated behaviours as layered upon on another (though they are metaphysical). If you tipped the inverted cone of memes on its side and looked at it from either end you would see the rings layered on one another. The primitive, instinctive, survival characteristics, the meme exhibited by all life, even by plants, runs through the whole cone (or organism). Similarly for the next level characteristics, and the next, and so on. This represents the idea that we exhibit primitive characteristics even as we learn, adopt or acquire more sophisticated values or memes.

Another complexity is that more than one meme can dominate. It is usual for one of the exclusive memes already outlined (instinct, relationship, personal, group, communication, consensus) to dominate and usually in sequence, but as one takes over from another, they might both be strong.

Recognising that mindsets emerge at differing rates and in different ways, depending on the organism and its environment, you can imagine that these graphics should be less uniform. Perhaps the cone would be much a more knobbly and concentric rings more uneven, with blurred gradations between zones (colours). And maybe the depiction should be human shaped, or spherical - the natural shape of universal objects. Or if you wanted to look into the sphere to envision the integrated memes a Reimann sphere is a pretty cool (mathematically sophisticated) image which might help stretch the imagination: